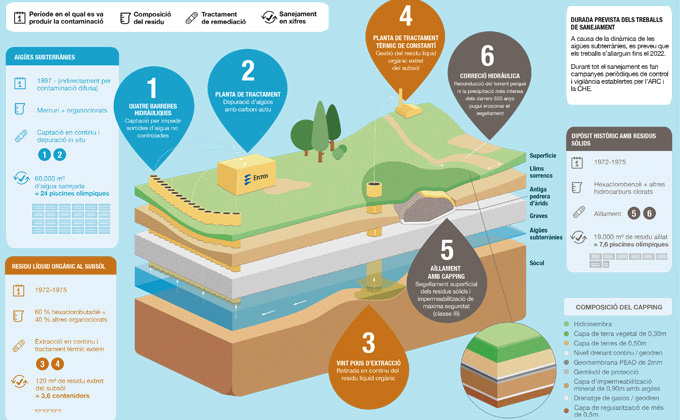 At the beginning of the year, we proposed to Ercros to develop a series of communication products to disseminate the environmental actions carried out by the company in the centenary factory of Flix. In particular, we suggested that it would be interesting to disseminate the most relevant outcomes resulting from the soil characterization studies –initiated in 2004– and the remediation works executed in the 2012-2016 period.

The proposal crystallized in 14 infographics that summarize the soil sanitation management in the factory. In addition, they provide an overview on the situation and on the effort invested by the company under the administration’s supervision. Thus, the infographics include aspects such as the history of the factory, the applicable legal framework, the work that has been accomplished and the future actions, as well as a glossary and a compilation of issues of social interest.

For the preparation of the infographics, we gathered up all the information collected in endless environmental documents and we developed a series of diagrams that included key messages and contents. Regarding design, we counted on the collaboration of Partee and pimpamvisual, who were in charge of the layout of the final information pack.

For us, this environmental communication exercise has been more than rewarding, you can have a look at its final result following this link.