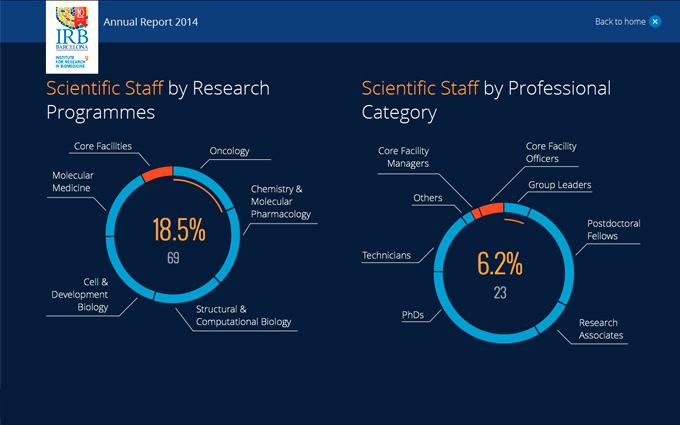 The Institute for Research in Biomedicine (IRB) of Barcelona is one of the main research centres devoted to health and human diseases in Spain, and one of the best in Europe. In fact, last year –and according to the SCImago Journal Rank (SJR) 2013– nearly 90% of their scientific production was published in 1st quartile magazines (Q1), meaning in specialised publications with high impact in its area of knowledge.

This is just an example of the good work the IRB team is carrying out, which is mostly portrayed in the Annual Report we have done for them, both in online and printed versions. We must say we are pretty happy with the result –fruit of our collaboration with Latent Studio and Tres i Punt– especially regarding the facts and figures chapter.

For us, it has been a pleasure to work along with IRB, a centre of which we were already fans, especially because of the IRB Dances video, a funny and playful way to raise awareness and collect funds for research in cancer, Alzheimer’s and diabetes.